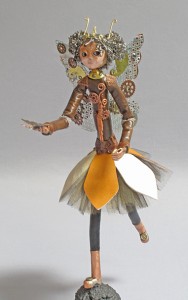 I’ve been working on several projects in the studio this week. With copper faces and other “bits and pieces”, all of my art dolls have a steampunk flavor to them, but some obviously more than others.  “Fly” certainly fits into that category.

I find that I time and again return to the theme of details in these small figure sculptures, and that these sometimes lead in a direction not originally intended.  With “Fly”I began with the intention of creating an updated version of an earlier piece that was captured in the motion of taking off herself.  When I had Fly just about done, and was preparing to take photographs, she appeared unfinished.  She to need a job to do.  Apparently she is the steampunk fairy that helps newly emerged butterflies and moths to fly themselves. 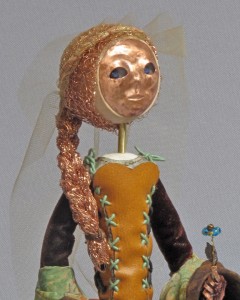 Lady of the Wood

This second art doll will be titled Lady of the Wood.  She was created in response to an art doll challenge.  I’m not quite sure if she is complete yet.  After looking at her photos I felt that there is still something she needs.  I’ll share a full length photo when I figure out what that something is.

For both of these dolls I think that I will be changing their positioning, as each seems to require a bit more animation .  I guess another photo session is in the future of both.