“Night Queen” is the newest addition to my art doll figure sculptures.

Occasionally, I let a piece design itself.  More often than not I create from a detailed sketch that has been reworked several times until I know not only the look, but also the way and order in which I will approach the piece.  Perhaps it was because I was also working on a larger commission sculpture at the same time, where I was refining, and working according to the patron’s vision as much as my own.  So for this doll, I hammered a face, enameled some nail heads for eyes, and created a basic body. From there I added and subtracted until I found I had a doll that felt like she was complete.  I must admit that working this way takes me a bit out of my comfort zone, and probably takes longer as well. 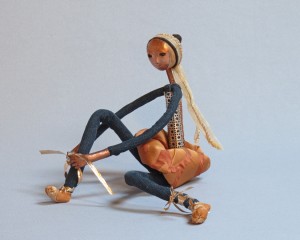 This second doll might look familiar to some.  It is the same “Lacing” piece that I created several months ago.  One of the challenges to working in mixed-media is that materials sometimes do unexpected things.  The original version had a strange little smudge on her face that I cleaned off.  Though I worked very carefully with a cotton swab, it seems a bit of cleaner touched the edges of her then light colored felt hair.  The edge looked just the slight bit dingy, so “Lacing” came home from the gallery, and received a new coiffure.

I guess sometimes the artist is controlled by the work more than he/she knows.

2 thoughts on “New and a Redo”