Working in the Gallery

I took two of my newest pieces to work with me at the Hillsborough Gallery of Arts today. In between welcoming visitors, and discussing the art, I can sometimes get little projects, like writing a blog post, done.

As I usually have several art dolls in various stages of completion on my work table, I decided to take two into the gallery with me so that I could share them with you.  I still have a stand to paint for one, and to decide on the second’s title, so phone snap shots will have to serve for the time being. 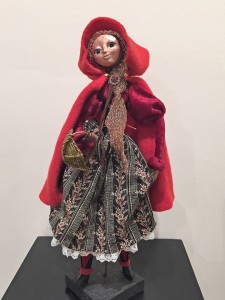 Red Riding Hood in the gallery

The next addition to my series of fairytale dolls, is my interpretation of Red Riding Hood. My Red has a hammered copper face and hands, and torch fired enamel eyes.  Her hand sewn clothing also features a lace up bodice. I’ll need to remember to move her hair a bit when I take my studio photos, so you can actually see it. I think her basket also needs a fabric liner and top to finish it off.  You will see Red again once I get her on her own stand.

This second figure is officially unnamed at this time.  She is a youthful seated figure in a little smock dress similar to an earlier art doll named Lily. Her expression emerged wide eyed and thoughtful.  I saw her as carefully considering some choice or problem.  My two “first viewers” at home thought that she appeared to be a bit worried that she had done something wrong.  I’m not completely sure about that interpretation, so for right now I’m going with her having made just a small misstep, and so I have named her Oops.

Oops, Red, and several other art dolls and sculptures will be installed in a show later this moth.  More on that to come.